Cut it according to the phases of the moon.

Marcela Aristizábal grew up among the coffee plantations and there she realized that the pickers work very early and finish their day at 9:00 am because it is said that the sun ‘stuns’ the crops. In the same way, humans are more sensitive and we bloom or “go crazy” according to the time of the day, the sun or the moon.

Today Marcela is a businesswoman who sells hair treatment products and enjoys an enviable mane, thanks to the fact that she also takes advantage of the moon phase theory to cut hair. She says that the results are better if done at special times and at specific moments. This particularly helps those with damaged and stagnant hair. 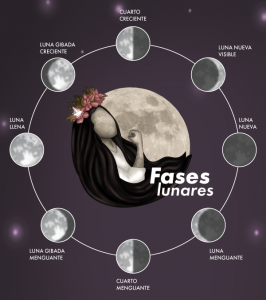 Crescent moon It is not recommended to cut it after 9 a.m. in any phase. When the hair is stagnant it is because we cut it at inappropriate times and dates according to the lunar influence. Women who do not have chemical processes in their hair, without dyes, such as girls, or those who say that their hair does not grow, can cut it during this phase, very early in the morning or after 6 p.m. Although if you have dye, but the hair is very healthy, you can also cut it on a crescent moon.

It is ideal to cut it on this date, because the hair grows abundantly and quickly, thanks to the influence of 100% of the light that there is during these days, which is also reflected in our mood.

The hair is cut after 6 pm, as in all phases. On this date it can be cut by women with dyed and unhealthy hair, or those who have dull, weak, limp, limp, with dead strands due to chemical processes.

Likewise, those whose hair has been affected by illnesses or treatments. A maximum of three days after the end of this phase it is still possible to cut the hair. Although the hair grows better by this time, it does not grow as fast. Ideal for those who want to maintain their haircut.

And how to do it?   According to Marcela, sometimes the energy of the stylists is not the best. If you just want to blunt your hair, she recommends that you do it yourself, trust you, that’s her advice.

Here, Marcela tells you how to do it if your hair is long and straight cut: 1. Divide your hair into strands. 2. Uncurl it from the ends to the roots. 3. Take the first strand and measure approximately three centimeters and start cutting. 4. Do the same with the other strands. 5. Finally, to even it out, make a ponytail. Put three or four rubber bands along the length of the ponytail and then you can trim it. You can use olive or coconut oil to moisturize the ends.

5 thoughts on “Do you want your hair to grow healthy?”